Ink’s My Thing is happy to welcome spec fic author Stewart C Baker for a quick chat. He’s bound to make it fun, so let’s make him feel at home. What do you need to know about Stewart? First, he is of the most recent crop of Writers of the Future winners, also a writer of haiku, and a perennial contender in our favorite competition, WYRM’s Gauntlet.

His work has appeared in Nature, Flash Fiction Online, and is forthcoming in Orson Scott Card’s Intergalactic Medicine Show. His most recent contribution to speculative letters will be in the colorfully named anthology No Sh!t There I Was edited by Rachael Acks, the Kickstarter of which can still be supported, if we act quickly. Since he’s lived in so many places (from Japan to England to the Pacific Northwest) he simply tells people he’s from the internet.

For all of these diverse adventures Stewart is known, but I first and foremost think of him as the one guy who instantly recognized my NES Bubble Bobble avatar on social media. If you work with or around him, you’ll learn one thing for sure about Stewart. He always brings his sense of humor.

Okay, the first part of this interview is multiple choice. So for starters, you are a writer because A) you had to do something with your creativity, and are a storyteller at heart. Or B) you needed an occupation that could accommodate excess beard and hair growth.

Bit of column A, bit of column B, with a dash of column C thrown in for good measure. I’ve always been a reader, so stories have always been important to me. I toyed with the idea of telling my own for a long time, but never really tried to learn how until about 2009. Which actually is about when I started growing my beard, come to think of it. I’d never connected those dots before–maybe you’re onto something!

Column C is the “inveterate daydreamer” column. I used to fill that column with reading and roleplaying games–of the computer and pencil-and-paper variety. These days I have to fit my daydreaming in whenever and wherever I can, and since I only need a piece of paper and some kind of wiring utensil for stories  (and poems), they’re easier than setting aside time for role playing in a group or on a console. Not to mention more rewarding! Plus, you can apparently get people to pay you for stories sometimes? Who knew?!”

What has been most rewarding about writing speculative fiction, or authoring in general?

There are few things more rewarding, for me, than receiving a comment from someone I don’t know, telling me they liked my story. It doesn’t happen often, but when it does it’s a very affirming feeling.

I’m a slow learner, so it takes me longer than it should to pick up new techniques and use them well. Another big challenge is time management. I suck at that, big time. Probably the biggest challenge is remembering to turn my “author mode” off sometimes. If I’m not careful it’ll creep over all the other things in life that are important.

I’m sure many of us out there would just like to turn our “author mode” on! Tell me about your interest in haiku. When, where, or with whom, did that begin?

I could tell you how it started, but then I’d have to kill you or my reputation as a haikuist would be in tatters.

Actually, that’s not true. I think. READ AT YOUR OWN PERIL, READERS!

I got into haiku in college, from a browser game called Kingdom of Loathing. The game is a giant send-up of MMORPGs, featuring stick figure art, ridiculous situations, and–you guessed it–haiku.  All the monster and item descriptions in the game are written as haiku (more accurately as zappai–an obscure term that essentially translates to ‘miscellaneous verse written in the form of a haiku’), and there’s a haiku dungeon and a haiku chat where you have to talk in 5/7/5 stanzas or be banned.

It was a lot of fun, and got me counting syllables. It was about another seven years before I realized I could write actual haiku and get them published in actual magazines, though.

I could talk about haiku forever, but I’ll spare you that. Suffice it to say that, while I left KoL behind eventually, the haiku bug stuck around.

In one haiku can you describe your experience at Writers of the Future?

muggy streets and no A/C

in the workshop room

Can we talk about the pageantry of the WotF ceremonies? Tuxedos and evening gowns went as far as the eye could see. Was that something you were expecting, or that you’re used to?

I’ve been a member of the Writers of the Future forum for a long time now (more than 6 years!), so I was more or less expecting the pageantry. It’s definitely not something I’m used to, although the tailcoat I wore is one I’ve had since I married my wife (I wore it for our wedding).

The pageantry, by the way, is far worse for anyone who presents as female. The women were submitted to extensive make-up and other prodding, and Author Services (the organization who puts on the contest) can be pretty tone deaf about respecting people’s boundaries when it comes to things like that, which made the gala in particular harrowing for some of the winners. 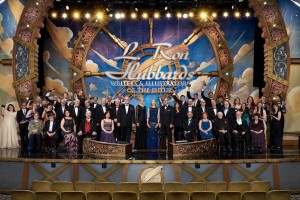 What other hoops did they have you jumping through?

For me, it wasn’t too bad, but I know a few of the other winners this year had a less-than-stellar time for various reasons.The workshop aspect, and getting to meet a bunch of other awesome up-and-coming writers, was pretty great.

What do you like best about the project No Sh!t, There I Was?

The fact that they bought a story I co-wrote for it, of course!

More seriously, what I think’s most interesting about the anthology (which funded on Kickstarter May 8th, but still has stretch goals open until May 15th!) is the breadth in tone of the stories editor Rachael Acks and zir slush team selected. As you can see from the posts on zir blog about the anthology, the stories run the gamut from hilarious to terrifying. Pretty impressive, especially for something with a title like “No Shit, There I Was” that I was sure would mostly attract ludicrosity. 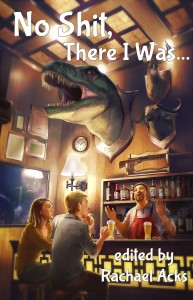 How did you make the acquaintance of Matt Dovey, co-writer of your anthology story, and do we need more of him in our lives?

How I met Matt Dovey? Well, no shit, there I was, when…

Actually, it’s pretty prosaic. I e-mailed him when he won Writers of the Future the quarter after I did and asked to swap stories with him so I could suss the competition for the Golden Pen (which he won quite deservedly, curse him!), which is the contest’s annual grand prize.

Since we both come from fairly middle-class English backgrounds, we ended up having a lot of commonalities, and when I left a comment on his blog about weasels, I jokingly mentioned that it would make a pretty good first line for the “No Shit” anthology if we put a fantasy spin on it, and then we were off. We wrote our 5500-word story in about 6 days, which almost never happens for either of us.

The story is titled “How I Became Coruscating Queen Of All The Realms, Pierced The Obsidian Night, Destroyed A Legendary Sword, And Saved My Heart’s True Love,” and that’s probably the least ridiculous thing about it.  There’s a preview of it on our website if you’re interested, and you can also see some of the supremely nice things Rachael Acks said about it on her blog. (Such as “I don’t know what kind of aberrant brain chemistry the writers might have been experiencing when they came up with all of this, but I devoutly pray that it happens again, and soon, because I need more incredibly fun, smart stories like this one in my life.”  Which I’ll take as a net positive, especially given that I’m fine being an aberrant.)

To read the whole thing, though, you’ll need to support the “No Shit, There I Was” Kickstarter!

Do you need more of Matt in your lives? Absotively. Check him out at mattdovey.com. 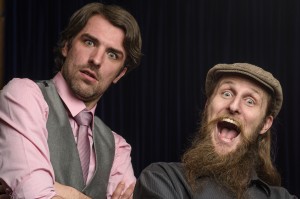 In the past year, I’ve seen you on stage at the WotF, with the help of WYRM, hosted your entry in The Gauntlet, read about you in your local newspaper, and now see this anthology. So, as a newly-crowned Writer of the Future, what does the future hold for Stewart C Baker (besides the new ‘terrifying author photo’)?

I have a story coming out soon in IGMS, although I’m not sure when exactly. It’s about space elevators and the end of the world, and is thoroughly post-colonial, so I’m pleased with that on all fronts.

Another thing I’m doing to keep my website, infomancy.net, active, is writing and posting 5-word stories. These are themed around people’s “last words,” and have been a mix of fun and frustrating to write. I’m kind of wishing that I’d picked a broader theme where all the characters didn’t die, but it is what it is, so I’ll keep on doing them until the end of the year.

More Baker & Dovey stories are in the works, too. Anyone who’s interested in keeping up with those can check out our gestalt entity’s website at bakeranddovey.com.

For more on Stewart, click the link and check out infomancy.net. And for more Ink, including other author and reader interviews, you know where to find me. Don’t be a stranger. You can even say hello.

4 Responses to “A Word with Stewart C Baker”