Batman v Superman: Dawn of Justice has come out, and to no one’s real surprise, a lot of people dislike it.

Some would say they hate it.

Others would even say they are boycotting it.

But what is behind Batman v Superman backlash? Is it the reaction of fans who got another lazy blockbuster when they would rather have had a film with some feeling and character continuity? Is there more to it for these fans, myself included, who respect comic book history? Who do we ask? Where do we begin?

We can begin with a story. Once upon a time, my friend Dan and I went to see a movie.

(Well, I saw the movie. Dan is another matter.)

My own issues with this film are not unique, but I think I can sum them up in a blurb: plot all over the place, awkward dream sequences, why is Doomsday in this movie?

However, to get a better sense of a purist’s distaste for Batman v Superman, I had a conversation with a longtime reader of Superman and Batman comics. I talked to Dan. I told him that I was seeing the movie, to which he replied, On Easter Sunday, dude?!

Well, we kept talking, and he even said I could blog about it. So, read on. You may find his opinions illuminating.

Dan, the obvious question. Do you plan to see Batman v Superman: Dawn of Justice?

Maybe at some point. Certainly not in the theater.

Well, that’s my intention. It won’t mean much to the overall success of the movie, but I’ll be happy knowing it won’t be making any money off of me.

I know I’ve felt the same way about movies, so I can understand. And I know you’re fond of both characters, but out of curiosity, would you say you’re a bigger fan of Superman, or of Batman? Does it even matter?

Probably more of a Superman fan these days. As a kid, Batman was one of my favorites. I didn’t compare him to Superman, but I loved Batman. It wasn’t because he’s human, but because he has these crazy cool villains. And he had a sidekick which I identified with as a younger brother to a kid who loved Batman, too. In my mind, I could be the Robin to my brother’s Batman.

But somewhere along the way, I started investing more time into Superman. I loved reading about this guy who came to this planet as an orphan. He was raised to put others before himself, can fight the most powerful creatures on the planet, but still takes the time to help a little girl find her mom when she’s lost in the mall. He tells a girl who’s contemplating suicide, ‘Hey, you’re stronger than you know. It’s not as bad as it seems, and I’m here for you.’ Both these types of things happen in the comics, which makes me love him more.

To me, Batman is the hero who shows kids that he’s stronger than the growing pains, and whatever life throws at us. Superman is the guy I look to when I want to find hope in myself, or in others, or when someone I don’t know well asks for a favor.

Do you think the producers of this movie understand the Superman you’ve just described? We have, by all accounts, been seeing a dark Superman.

They don’t understand Superman, that much is true. They barely seem to understand Batman as I know him. They’ve just turned him into an asshole who is no longer worried about killing because ‘if it happened in other movies—why not ours?’ 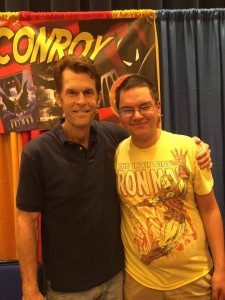 Dan with Kevin Conroy, longtime voice of the animated Batman

People wanted to see Superman hit things, not necessarily a dark and whiny character. But Snyder and Goyer don’t see a difference with that.

You may not have seen the film, but you have been told about it by a number of people, and I’ve seen you share nearly every review or article about Batman v Superman. So, what’s wrong with it?

What’s wrong with it? Besides the fundamental misunderstanding of the characters whose names are in the title, there are problems with plot, not being able to control or maintain enough storylines for the movie to work, and everything seems to suffer because of it.

They didn’t just fly too close to the sun. They flew into it. What’s left is the ash of a movie that could have been good if they decided to focus on what matters.

Let’s pretend for a minute that DC and Warner Bros. care what you and I think. As a comic book fan who wants to see a good comic book movie, what could have made this film better?

I mean, any number of things. Editing, character development, a sensible plot, a taste of things to come, and maybe a lesson to be learned by the characters in it? But that’s not what we got. Yet, people will go anyway because it’s the first time the trinity of DC is in a movie. Or, because it’s got Batman fighting Superman, like casual fans have been wanting since the comic Dark Knight Returns came out in the 80s.

Maybe give Superman and Batman a real resolution to their fight, not ‘Hey, both our mom’s names are Martha. Let’s forget the fact that I think you’re an overpowered God who should be killed, or that you think I’m a deranged vigilante whose brutal methods make me just as bad as the people I’ve sworn to fight.’ Maybe make Lois less of a damsel in distress. Maybe give Lex a decent motive for why he’s pissed at Superman.

But Zack Snyder can’t tell a story to save his life. He can make things look beautiful and spectacular, but that’s not enough to make a story good. It’s enough to get someone interested, but not enough to enjoy the movie. And I know because I’ve seen Sucker Punch. The movie looked great, but made no sense at all.

Do you agree with sites, such as The Comics Beat, which have said that Batman V. Superman sacrificed storytelling just to set up a Justice League franchise? iO9 has also detailed how much of the movie was set-up.

I think it did take time away from plot and character development to introduce characters, and set up the League. The problem with that was it came off as forced, and seemed more like a pathetic attempt than an organic sequence in the movie.

You said that they barely understood Batman earlier. Can I ask, did Tim Burton or Christopher Nolan understand him?

Hollywood seems to lose more and more of its understanding of who Batman is, and how he does things. Nolan and Burton made fine Batman films, but there were flaws to the character. Burton’s Batman saw him attaching dynamite to a thug, and tossing him into the sewer to kill him, where Nolan’s Batman took eight years off after the death of Rachel. These things would never happen, and I say this as a fan of both the Burton and Nolan films.

Will we–can we–ever see an ideal movie for either Batman or Superman? Have we seen one already?

You can take liberties with these characters. Lord knows you can’t make them 100% like the comics they come from, but even then there are some things that are vital to what makes these characters who they are.

Richard Donner Superman movies were my ideal Superman movies. They made the character believable. He didn’t live in our world, but we wanted to live in his. Superman hadn’t been brought down to our level as humans like Zack Snyder has done, but he had helped elevate us to his level like he’s supposed to.

As for Batman, the Adam West movie was an ideal version of him in that time period, although I’ve never seen a perfect live action version of the character. The closest we’ve been is probably The Dark Knight.

But there are several animated movies that have shown the Superman I know and love, and the same goes for Batman. Superman vs the Elite, and All Star Superman. Batman: Under the Red Hood, and Batman Year One. I hold out hope that we’ll get another chance to see a live action movie where the caped crusader meets the blue boy scout, and become the best of friends they’re known to be in the comics. Yeah, they can fight, but let it be more believable as to why and how it ends. Let the movie have no clear winner.

Scott Snyder wrote in a more recent issue of his acclaimed Batman run, ‘Who wins in a fight between Batman and Superman? The answer? No one does.’ 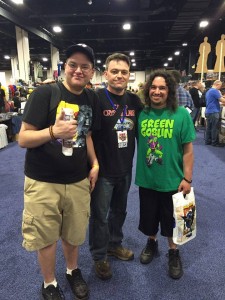 If you’re a reader dropping by with an opinion, we hope you won’t keep it to yourself.